Under the Sea! October FUNWORLD Floating Your Way 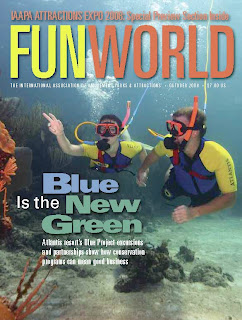 Last month I posted about my trip to Atlantis in the Bahamas, and now the fruits of that labor (yes, it was work!) should be hitting your mailboxes smack-dab on the cover of the October issue of FUNWORLD.

I feel pretty safe in saying this is the first time IAAPA's official trade publication has ever had an underwater photograph on its cover—I know it's the first one the magazine's ever shot for itself. I didn't shoot the photo, of course (wow, you should have seen the awesome getup our photographer used—he essentially put his camera in a bubble), I was swimming around right above as it was taken (being careful to stay out of the shot, of course).

But enough about the photo, already. The cover story this month focuses on Atlantis' Blue Project, the resort's big-time Bahamian conservation effort focused primarily on maintaining the islands' coral reef, which you can see in the photo (see, there I go again …). The piece also demonstrates how Atlantis has incorporated its tourist-focused Blue Adventures venture into the Blue Project, turning conservation into an actual business. That nice couple on the cover is participating in Atlantis' "snuba" (think a snorkeling/scuba diving combo) adventure.

Now that all is written and done, October has turned out to be one of my favorite issues of the year. There's great, great stuff in this issue, such as:

• An in-depth look at what other amusement facilities are doing to go green.
• An examination of how European parks are investing in hotels to increase length of stay.
• A round-up of casino waterpark projects.

And, in case you hadn't noticed, we have this little event coming up in November called IAAPA Attractions Expo 2008. Maybe you've heard of it? You know, the biggest trade show in the industry? Well, this month's FUNWORLD offers 14 pages of Expo preview coverage, letting you know all about tons of cool stuff going on at the show this year. Grab your calendars now!
Posted by Jeremy Schoolfield at 3:49 PM