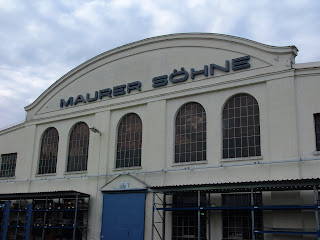 The night was a Maurer showcase, opening with a trip through the company’s factory that would make any coaster fan drool. Scattered throughout the coaster builder’s complex were pieces and parts of what will in March become “Hollywood Rip, Ride, Rockit” at Universal Orlando. This is the biggest coaster MS has built in North America, said Jorg Beutler, the company’s managing director, and it involves an element the manufacturer has never tried before.

I didn’t catch the “official” name, but essentially it’s a non-inverting loop. Beutler said Universal didn’t want the ride to have loops because inversions to ensure it’s a ride the entire family will want to ride together. So what the MS designers drew up is a twisted element where the car starts to rise like it’s going into a loop but then twists back to right-side up as it crests the “loop,” then twists downward again to complete the motion and continue on the journey. It’s a little hard to describe, I know, so you’ll just have to see it to believe it. You might not even think it possible, even then.

As we wandered through the complex, there were various pieces of track in various stages of completion on display. Here are a few shots: 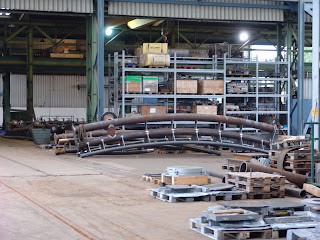 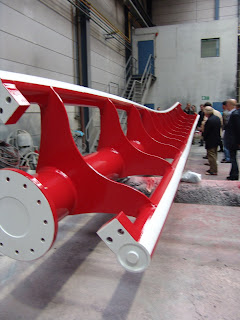 Maurer Soehne also had representatives of two of its biggest clients, Disney and Universal (OK, they really don’t come any bigger than that), give presentations. David Wilson, project director for Walt Disney Imagineering at Euro Disneyland, gave his five rules for creating a successful attraction. They are:

1. Storytelling—“Our parks are known for creating an environment where guests can escape from the real world into a world of fantasy and imagination—and we do that through storytelling.”
2. Make sure you respond to the needs of the park.
3. Add some magic—something unexpected for the guests.
4. Make sure it’s reliable and has a high capacity. “You spend a lot of time, effort, and money to build these wonderful attractions and people come to see them. If they can’t get on because it doesn’t have a high enough capacity or it breaks down in the middle of the day, that’s disappointing.”
5. Safety—The rule that’s so fundamental, “it’s an implicit rule,” woven into the fabric of everything Disney does.

Universal’s Steve Blum then gave a blow-by-blow account of his company’s creation of “Hollywood Dream—The Ride,” which debuted last year at Universal Japan. Blum’s presentation was jaw-dropping in its account of how many obstacles the project team of 20 employees had to overcome to create the instant-classic roller coaster. Whether it was having to build support structure in the midst of existing attractions, dealing with government regulations, or retrofitting pieces of steel once they arrived on site, Blum said the key to the entire endeavor was a flexible, quick-on-their-feet staff.

Finally, the night ended in Maurer Soehne’s No. 1 warehouse to the rhythmic beats of Power! Percussion and a laser light show that sent IAAPA Summer Meeting out on an eye-dazzling note.