Today I visited two of the most revered icons in Munich: The BMW headquarters, and Allianz Arena, where the city’s football (soccer, for you Americans out there) plays.

More specifically, we checked out undoubtedly the coolest car dealership I’ve ever seen. BMW Welt is across the street from the automaker’s headquarters. Here’s a picture of the latter, with the newly refurbished BMW Museum to the right, followed by a pic of the Welt: 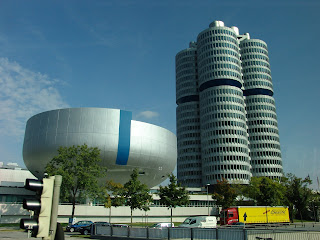 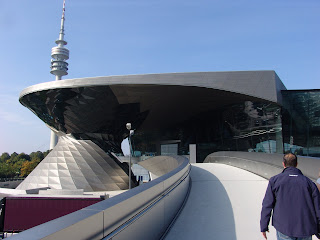 People come from all over the world to BMW Welt so they can pick out and buy their German-made automobiles in person, right from the source. Inside, there are 20 rotating platforms where potential buyers can check out their own car; people (like me) actually watch other people buy cars, that’s how cool this place is. Here's a shot: 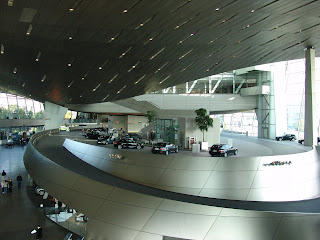 And here's people looking under the hood, getting ready to close a deal, I assume: 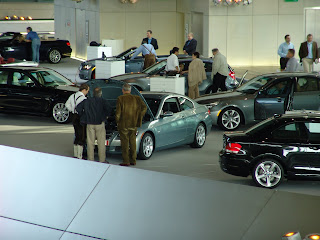 You can get right up close to all the BMW models, as well, and the company is such a big deal here, the Welt has a mini-interactive exhibit of its own, where you can “test drive” a car, and play educational hands-on games that will teach you about what goes into making one of these machines. There’s even a kids’ area where they can become “junior” engineers. Like I said, essentially this is what we’d call in the States a car dealership showroom, but that is definitely doesn’t describe all that’s going on here. No other dealership I’ve been to actually chauffeurs its clients to the door in black BMWs—straight from the airport, I’m assuming. Here’s another look inside the huge facility: 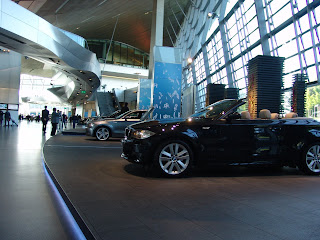 So if there’s anything that can equal the fervor in Munich for BMW, then I guess it would be the city’s football team. On the second half of our tour today we got an inside look at the team’s Allianz Arena, which opened in 2005. The stadium is unique in that it’s covered with a type of hard plastic shell on the outside that allows it to be lit in different colors depending on which teams are playing on a given night. It’s unlike any stadium I’ve seen, certainly. Here’s a photo: 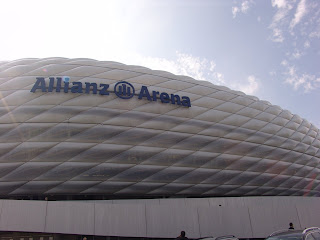 The arena holds nearly 70,000 people. Here’s a look from the upper and lower decks—seems to me there’s not a bad seat in the house: 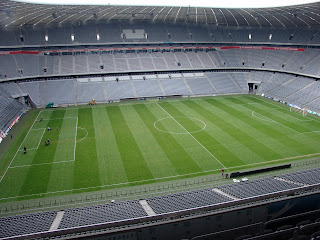 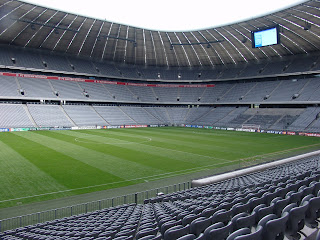 We then were taken into the bowels of the arena to see the Munich team’s locker room and the tunnel where they enter the field, gladiator-style. Our guide said this is considered nearly hallowed ground. Here’s a look: 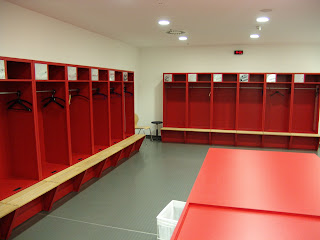 Well, that does it for now. I’m hoping to post more later tonight after an evening at the Maurer Soehne plant. Otherwise, more tomorrow, as EAS 2008 begins …
Posted by Jeremy Schoolfield at 10:35 AM