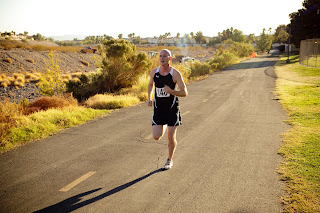 Matt Sanders of Premier Rides (above) won this morning's Give Kids The World 5K Fun Run at Pecos Legacy Park in Henderson, Nevade, in a time of 16 minutes, 34 seconds.
About 50 participants came out for the third annual event to benefit the Kissimmee, Florida, charity that grants Wishes for children with life-threatening illnesses. Organizers were pleased with the turnout, especially considering this is IAAPA Attractions Expo's first time in Las Vegas and early-bird start time is when some people in this town are just going to bed.
"Some of them maybe didn't even go to bed—in Vegas, you never know," joked GKTW President Pamela Landwirth as the runners took off down the course. "We didn't know what to expect in Las Vegas, but I think it shows what a wonderful community IAAPA is. They're caring and they love to support the Village."
"I wanted to do something good for IAAPA, Give Kids The World, and my company," Sanders said after the race. "It was a little tough and tiring, especially since I flew in yesterday from Maryland, but it was a good time."
As IAAPA Attractions Expo returns to Orlando in 2010, so, too, does the 5K—and next year may see a special twist to this event. Two weeks ago GKTW, taking a cue from the Expo race, held its first 5K through the Village itself and drew a tremendous crowd of 350 runners. Landwirth is hopeful next year's Expo race will follow that same course.
"It was a fabulous event," Landwirth said. "Most of our runners came from our theme park friends. We're going to do it again next year, ,and the thought is to do this one there, too. It's like running through heaven." 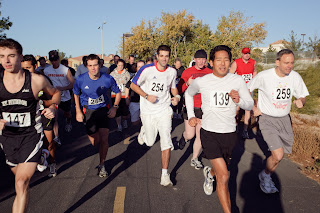 Posted by Jeremy Schoolfield at 4:06 PM No comments:

In the October 2009 issue of FUNWORLD, I wrote about some theme park engineering groups popping up on college campuses across the United States, most notably at The Ohio State University and the University of Toledo. Well, some of the guys I profiled in that piece came all the way to Vegas this week to attend IAAPA Attractions Expo 2009.
I sat down with four of them this morning and was glad to hear they're having a great experience at this year's show. They said the article has really done a lot for their groups.
"People know about us now," said Dan Linden, a cofounder of Ohio State's Theme Park Engineering Group.
"We've gone up to meet with companies and they say, 'Oh, you're the guys from the article!'" said Jeff Piggrem, president of the Toledo group.
"We actually got stopped on the way to a meeting and were asked about an engineering problem," added Brad Okeson, the Ohio State group's president. "It was insane."
Okeson said other groups from around the country have contacted them after seeing the piece in FUNWORLD, including the University of Maryland and the University of Central Florida.
He also said the article came at a good time, as Theme Park Engineering Group was just starting to take off on its own. At a freshman outreach fair in September, the group received 150 signatures from interested students—in the pouring rain, no less—a significant jump over last year. "We had lines of people," he said.
While at Expo, Linden said the goal is to make more contacts in the industry that will hopefully pay off when they all graduate (Linden finishes in three months). They also spoke with IAAPA reps to see how the student groups nationwide could become more involved in the association and the industry at large.
This year is Linden and Okeson's second trip to IAAPA Attractions Expo, and they approached it much differently the second time around.
"We've learned more about how to best utilize the convention, making it out to all the [networking events]," Okeson said. "We have more of a mission and goal as a group."
"We gave out a lot more cards this year—and got a lot more cards, too," Linden said.
Posted by Jeremy Schoolfield at 2:29 PM No comments:

IAAPA Attractions Expo 2009 Is Under Way!

Attendees were jam-packed in the lobby this morning waiting to get into IAAPA Attractions Expo 2009, which threw open the doors at 10 a.m. Vegas time.
For up-to-the-minute updates from all over the Expo, look to your right and follow the association's Twitter feed at www.twitter.com/IAAPA2009. You can also read some of the stories from The IAAPA Attractions Expo Show Daily here.
Best to everyone this week. Here's to a great show!
Posted by Jeremy Schoolfield at 1:56 PM 1 comment:

IAAPA Webinar: Are You Ready for Vegas?

IAAPA wants to help you gear up for attending IAAPA Attractions Expo 2009 in Las Vegas, Nov. 16-20. It's the association's first time in that famous city, so attend Tuesday’s webinar at 2 p.m. Eastern, and get the scoop on transportation options and advice, new features of this year’s exhibit hall, locations and transportation for special events, and general tips for first-time attendees.

Take advantage of IAAPA expertise, and learn all you can before you head out to Vegas!

To follow along with FUNWORLD magazine, take a look at our special Vegas section in the October issue. View the digital edition by clicking here.
Posted by Amanda Charney at 9:00 AM No comments: