OK, first off: Unfortunately I’m not going to make it to Oktoberfest tonight, so yesterday's promise for reporting from one of the world's biggest parties will have to wait a few more days.

But, that’s not to say I don’t have anything to write about this beautiful Bavarian evening. Quite the contrary.

Today I loaded a bus with several other Summer Meeting attendees and drove about an hour and a half into the rolling hills of the Bavarian countryside on a quest to tour one of the most famous castles in the world, Neuschwanstein of King Ludwig II. Besides the fact that it’s a popular historical destination, this trip was especially appropriate for our group, as King Ludwig’s gorgeous structure on a hill is said to be the inspiration for one of our industry’s most well-known and beloved landmarks: Sleeping Beauty castle at Disneyland. Compare the photos below—the first is Disney’s castle, the second two are photos I shot this afternoon. The towers are especially alike. 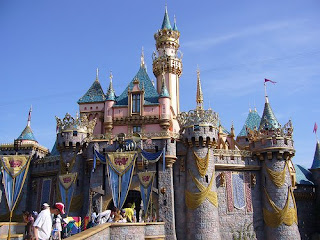 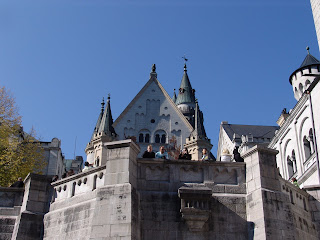 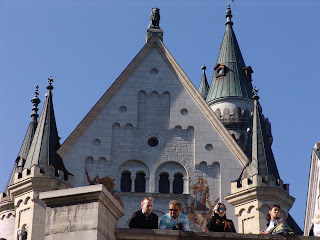 But that’s not all. “Mad” King Ludwig serves not just as inspiration, but takes a starring role in Busch Gardens Europe’s “Curse of DarKastle” mega-dark ride in Williamsburg, Virginia. Here’s a photo of the castle the Busch folks built in his … honor: 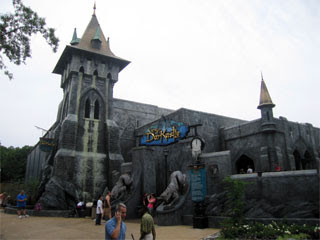 During the half-hour tour we traveled all through the castle, going up and down literally hundreds of spiraling steps. Though it was under construction for 17 years, Ludwig’s fourth palace was never finished because construction ended upon his untimely—and controversial—death in 1886. But what was completed is spectacular, most notably the opera house that takes up most of the third floor; Ludwig was a celebrant of Wagner (the castle is dedicated entirely to the legendary composer), and the idea was to play Wagner’s music in that chamber. Unfortunately, Ludwig never got that chance, as he died two days after it was built; his legacy lives on, however, as concerts are held regularly in the hall today.

Unlike some tours of historic structures (I’m lookin’ right at you, White House), I really felt like I got to see and experience all of the major elements you’d wouldn’t want to miss in a program like this: We stood in Ludwig’s throne room (with its mosaic floor made of 2 million tiles), his bedroom, dressing room, living room (he’s also a big fan of swans, as they are all over this room), as well as several other ancillary spaces (his secretary’s office has one of Europe’s first telephones). Rather than just looking in on these rooms, guests walk right through them, as if we were real visitors of the king.

And what a place to live! I can see why Ludwig would want his castle built there. Though you’re not allowed to take pictures of anything inside the castle, several windows were open at various points, so I took some photos of what Ludwig saw when he looked out upon his land. Here are a couple: 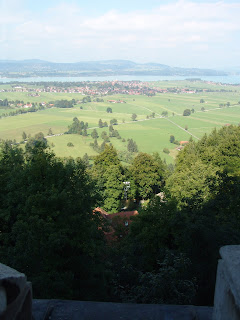 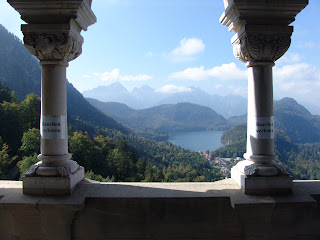 Finally, after the tour I made a brisk, challenging uphill climb to a nearby canyon spanned by a small bridge affording tremendous views of Ludwig’s home. Here’s one (apologies for the scaffolding—the castle is being refurbished): 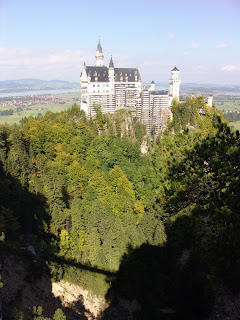 So, there you have it. Everyone came back a little tired (it was quite a trek up a long, winding road to reach the castle), but it was well worth the forthcoming sore legs.