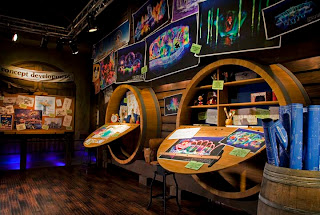 Photo courtesy The Walt Disney Company
The year-end November/December issue of FUNWORLD will be making its way to your mailbox over the next couple weeks. On the cover is Jay Rasulo, chairman of Walt Disney Parks and Resorts, who discussed with me the massive overhaul at Disney’s California Adventure, Disneyland’s sister park in Anaheim, California.

My exclusive interview with Rasulo is part of a 10-page section highlighting all of the changes coming to DCA through 2012 and the impact the re-Imagined park will have on the Disneyland Resort. But there was still a small topic I didn’t have room to address in the magazine: The Walt Disney Imagineering Blue Sky Cellar.

The Blue Sky Cellar is a small building right in the center of the park. Inside it offers guests an extensive preview of what’s to come at DCA. Themed to look like an Imagineer’s office, the cellar offers models, concept art, and preview videos of future attractions such as the “World of Color” nighttime show and the renovations already under way along Paradise Pier.

“We’re relatively quiet, behind-the-scenes people,” said Bob Weis, executive vice president, creative, for Walt Disney Imagineering, during my visit to the park this summer. “But there’s a side of us that gets so excited about the research, artwork, and designs we do. At the beginning of [the DCA project], we wanted to communicate more frequently with our guests because they bring so much to our process.”

The Blue Sky Cellar, he said, is a way to “communicate less formally, more frequently, and bring people into the process much earlier than we’ve ever done before.” 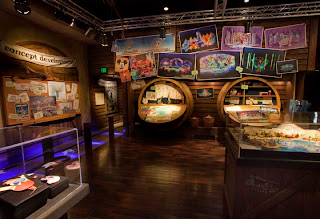 Photo courtesy The Walt Disney Company
And the experience isn’t limited to guests in the park. This summer, Disney took the Blue Sky Cellar to the Internet with the launch of DisneysCaliforniaAdventure.com, an online version of the physical location. The site is filled with concept art and videos of Imagineers—including Pixar’s John Lasseter—discussing the many projects happening at the park.

Look for my full report on the DCA extreme makeover in the November/December issue of FUNWORLD.
Posted by Jeremy Schoolfield at 3:20 PM