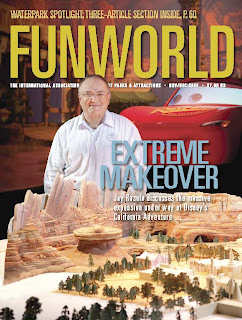 Every year in honor of IAAPA Attractions Expo, FUNWORLD publishes a giant double edition for November/December. The 2009 "trade show issue" is a highlight of our year, featuring a wide range of articles from around the globe. The magazine should be hitting your mailboxes soon (if it hasn't already), but if you'd like to start reading immediately, you can check out FUNWORLD's digital edition here.

Leading off is my exclusive interview with Walt Disney Parks and Resorts Chairman Jay Rasulo, who talked with me at length about the past, present, and future of the Disneyland Resort, and what the massive overhaul under way at Disney's California Adventure will mean for the park and the tourist destination as a whole. Then, I went behind (and under) the scenes with several Imagineers to talk specifics about what's coming to DCA over the next three years, most notably the "World of Color" nighttime show, set to debut in spring 2010.

Nov/Dec also features two major three-article sections: The first is a regional profile of the attractions industry in Japan (including this awesome story about a Ferris wheel inside a building); the other is a global look at waterparks, including spotlights on Malaysia and Australia from Departments Editor Marion Hixon.

News Editor Keith Miller has three trend-oriented reports in this issue. He examines:
• The growth of sports resorts around the world.
• The booming popularity of mazes.
• How U.S. parks reach out to members of the military and their families.

All in all, there are nearly 30 articles in one of our favorite issues of the year. Read on, enjoy, and let us know what you think!
Posted by Jeremy Schoolfield at 1:43 PM