For the "M&S Minute" feature in June’s issue of FUNWORLD, I talked with with Mark Weston, president and co-owner of Funtraptions, a theming, design, and manufacturing company. I really enjoy articles like these which allow me to see into the heart of a manufacturer’s operations. During our interview, Weston offered valuable insight on the process of theming an attraction. He said Funtraptions can take between two to four weeks to create a concept, and anywhere from four to six months to build the attraction. Here, he walks us through the communication process between contractor and operator. 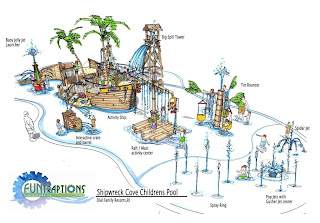 1. First, Funtraptions will talk directly to an attraction owner. Sometimes this can take time and might mean working through other consultants on the project.

2. Then, Funtraptions will help the client articulate the attractions' storyline. The client may want to replicate a town’s history or take on a Polynesian theme. “This helps us fully integrate the theme with the environment,” Weston says.

3. Next, with thumbnail sketches and drawings, Funtraptions helps operators visualize the reality of the attraction. Weston stresses the importance of the theme’s enduring appeal for a broad audience. “If it’s a fad, you’re going to invest a lot of money in something that won’t be popular over time,” he says. An early sketch of the Shipwreck Cove WetScape at Dial Family Resorts in Rhode Island is pictured above left.

4. Finally, Funtraptions will show facility operators what the attraction will look like incorporated onto the play structure and the interactive area surrounding it. “There are two factors: the setting and the play equipment,” Weston says. “The latter can bring the place to life with people in it.”

“After that process, we don’t have to worry that we’ll miss the mark,” he says. "We're also savvy to the fact that most developers have a budget—so we work very hard to translate the story and theme into an achievable scenic package—even the parts we have nothing to do with." Weston gives the example of collaborating with a client's rock work company to fill unplanned areas of the attraction. "It's all about how you get the most out of the money," he explains. "We give suggestions and approaches on how to do things with blank space so the whole thing comes together in an integrated package—from the hallway leading up to the attraction—pre-show—to the gift shop afterwards—the post-show." The "Beach Hog" at the Victory Junction Gang Camp in Randleman, North Carolina, is one of Funtraptions' most intricate projects, and is shown at left. 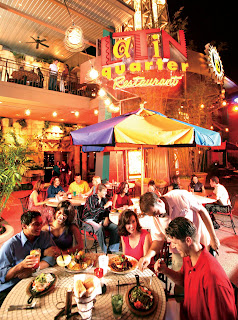 Field Trip!
Weston says both park operators and theming manufacturers should be inspired by other successful themed attractions throughout the industry. “Look at icons, they’re everywhere we go," he says, “like the St. Louis Arch, the Statue of Liberty, or a town square. If your town has a unique look or architecture to it, use that imagery in your theming.” He offers the following examples as sources of inspiration.

1. Madame Tussauds – multiple worldwide
2. Universal CityWalk – , and (the attraction's Latin Quarter is pictured at right)
3. Broadway at the Beach –
4. Science Museums – “Museums do a very good job of immersive theming,” he says.
5. Any downtown or city center with symbols of the town’s historic roots, culture, or current personality.