Back Up the Hill: Day 2 of Legislative Summit

Will Hillary be added to Obama’s ticket or vice-versa? Who will McCain pick as a vice president nominee to strengthen his Republican base? These questions of national affairs and more were discussed with excitement this morning to kick off the third and final day of the 2008 IAAPA Legislative Summit. Representing both sides of the aisle, Steve Hart and Bert Carp of Williams and Jensen discussed strategies of the presidential and congressional races and who will be losing or winning seats in the House and Senate come November. It was a fitting start to the politically-charged day, in which attractions representatives continued meeting with their district and state representatives.

I was lucky enough to tag along with IAAPA’s Stephanie Thienel, Kennywood’s Andy Quinn, Jim Seay of Premier Rides, and Len Morrisey from ASTM International, while they visited representatives from Maryland and Pennsylvania.

Our first stop was the office of Senator Benjamin Cardin, of Maryland. Danyelle Solomon, Cardin’s legislative assistant, met with us as the park representatives told her about their concerns with H2B Visas and how the Travel Promotion Act could benefit both small and large businesses in Maryland.

These two issues are what IAAPA members wanted to bring to the representative’s attention. H2B Visas are important because many of our members use them to employ foreign workers. If passed, the Travel Promotion Act will help advertise the U.S. to foreign visitors as well as welcome them and increase positive U.S. perception, at no additional cost to taxpayers. 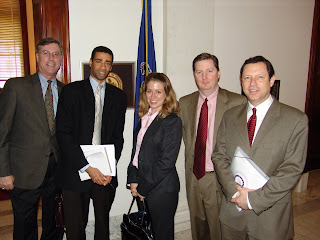 Our second meeting brought us to the office of Senator Robert Casey Jr., from Pennsylvania. His legislative correspondent, Makese Motley (second from the left), met with us; Motley, coincidentally, held an internship at Disney’s Magic Kingdom after college and is familiar with the importance of tourism, the staffing needs of attractions, and international visitors. He was encouraging when the topic of H2B Visas came up, telling us that his office has been tracking the issue and is still coming to a consensus on their position. “We know it’s affecting small businesses,” he said. “It’s definitely on our radar screen.”

Being new to the inner workings of the legislative process, I was really impressed with how open-minded and receptive senators and their staffers are. We went into the meetings with solid information, but were also able to share personal anecdotes about how each issue affects our businesses.