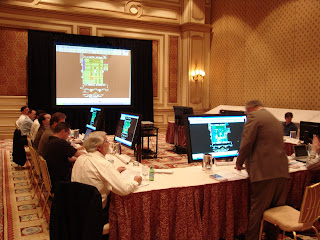 8:20 a.m.
We're getting close now, I think. The committee is introducing itself, identifying which segments of the exhibitors they're handling as part of the allocation process.

8:11 a.m.
Here's a look at the room. The gentleman from the convention authority called it a "war room," and basically took the words right off my fingertips. For those of you who follow the NCAA men's basketball national tournament, this also seems to me what that committee's room must look like on "Selection Sunday." That's Jack Mendes with his back to us, who chairs the allocation committee.

As you can see, there's a big projection screen in the front of the room that displays the floor as it fills up; groups of committee members also have their own flat-screen monitors for a closer look.

8:05 a.m.
The meeting is now under way. The head of the Las Vegas Convention and Visitors Authority just addressed the committee (a very big deal, I'm told—he doesn't come to these things for just anybody) and welcomed them to Las Vegas. He mentioned that one of the benefits of exhibiting in Las Vegas is increased appeal to international visitors.
Posted by Jeremy Schoolfield at 11:00 AM