More from April’s FUNWORLD: What Coaster Enthusiasts Are Looking Forward to This Year

For ’s issue of FUNWORLD, I talked with Mark Cole and John Gerard, president and PR director, respectively, of American Coaster Enthusiasts (ACE) to gauge their thoughts on the upcoming season. It was great to hear from people with a real passion for parks and deep knowledge of what’s going on in the world of coasters. I took tons of tips away from our conversation—mostly, what rides I want to try out this year! Below is the full version of my interview with Mark and John, a portion of which appeared in ’s FUNWORLD.

Coaster season is coming and Mark Cole and John Gerard are experts on riding them, visiting between 15 and 20 parks a year and traveling as far as and in search of a good loop. In anticipation of the season, we picked their brains for the coasters they can’t wait to ride.

FUNWORLD: Which coasters are you most looking forward to this year? 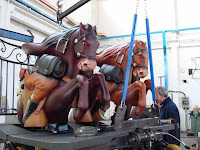 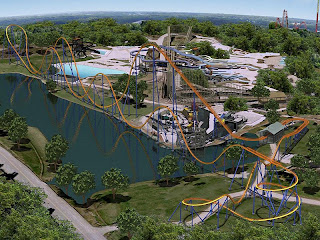 JG: “Evel Knievel” at Six Flags St. Louis looks to be a great woodie from Great Coasters International. For the non-wooden coasters, I’m really excited about “Behemoth” at Canada’s Wonderland (click on rendering at left to enlarge)—it’s a big, tall, fast one. And then there’s Hard Rock – a whole new park! They’ve got great theming and five new coasters, too!
MC: The ones I’m most anticipating include the “Steel Hawg” at Indiana Beach and definitely “Shivering Timbers” at Michigan’s Adventure, since I’ve never been to the park.

FW: What’s in the works for American Coaster Enthusiasts?
JG: ACE has just unveiled an updated web site (www.aceonline.org) with better graphics, easier navigation and more information. And this year we have our Spring Conference in May at ’s Adventure and , Coaster Con XXXI in June at Six Flags Over Georgia and Wild Adventures, and our Preservation Conference in August at , Six Flags New England, and .
MC: We’re always trying to find ways to give our membership more value. We’re planning a trip to for summer 2009.

FW: This could be hard to answer, but do you have a favorite coaster?
MC: If I could ride “” at Knoebels every day of my life, I would be a happy man! It has everything I find fun in one coaster—speed, airtime, and a double-up/double-down hill—and it was my first coaster experience as an ACE member. The “Jack Rabbit” at Clementon Park has since been demolished, but it was my first major coaster ride as a child. Also, the “Big Dipper” at is another fun coaster.
JG: My current No. 1 is “The Voyage” at Holiday World [in Santa Claus, ]. It’s full of action and speed and doesn’t stop until it gets back to the station! That was the first coaster in which I was actually out of breath by the time it was over. However, my all-time favorite is the “Giant Dipper.” The first time I visited , as a 12-year-old, it had just closed the month before. In the intervening years I looked upon that twisting first drop and would think, "If only …" Thanks to the Save the Coaster Committee, that coaster was saved and I got to experience that great first drop (and the rest of the coaster, as well!). Now that I live in , I can ride it any time I want. I especially like being able to ride it in the wintertime when almost all other coasters are closed for the season.

FW: What excites you about roller coasters?
MC: For me, it’s the fun factor. If I can get on, feel comfortable, and just enjoy the ride, that makes a “favorite coaster.” Air time, floating, or being pushed into my seat by gravity is always fun.
JG: If you asked 1,000 people that question, you’d get 1,000 different answers; that’s what’s great about coasters. I personally like a fast coaster with height changes, negative G’s, directional changes, and no “dead spots” in between.
MC: Loops are fine but to me, you don't need lots to make a good coaster.

FW: What’s the furthest you’ve traveled or most effort you’ve put into riding a coaster?
JG: The furthest I've been is with the ACE/ECC trip that took place in September 2005. Those 12 days were some of the best of my life! The longest trip I've taken was in 1996; I traveled alone by car, starting at Waldameer and ending up two weeks later at what was then called Visionland.
MC: I went with the European Coaster Club to Scandinavia in 1995 and 2003, and with ACE to ride coasters in and . The one I will have the hardest time getting to—but still want to try—is Upper Clements Park in .