5:45 p.m.
The committee is officially DONE for today. Final numbers are in:

The members moved fast today, assigning almost as much space in one day as they did in two last year.

The committee reconvenes at 8 a.m. Pacific Time Thursday morning, with about 100 booths still left to slot. I'm thinking it'll be over quickly, but that all depends on how many booth moves come in overnight.

I'll be back here to cover everything as it comes to a close.

5:16 p.m.
They're back at it—again. There's talk of only working for about another 20 minutes or so before calling it a (productive) day.

4:47 p.m.
OK, we just crossed into the 400s. The committee has found a nice groove and is moving quickly, even with some pretty detailed discussion here and there.

4:37 p.m.
There was discussion flying around the past few minutes about a booth that actually had to be slightly downsized because there simply aren't enough big spaces left. I listened in as several different people in the room worked the problem. Of course the Exhibit Sales Team wants to accommodate requests for bigger booths, but it just couldn't happen. They did, however, spend about five minutes discussing various scenarios to make sure the company in question received the best possible and prominent location.

This would also be a good time for me to clean up some earlier misinterpretations of data. I said earlier that they're assigning more than 600 booths during this meeting, which is not correct. By the time we're done, more than 600 booths total will be assigned, but, again, it goes back to that whole pre-space allocation option for 25-year veterans.

Don't think this isn't a big year, though. In 2007 the Space Allocation Committee slotted 462 booths at this meeting. This year, the members will place approximately 560, a new record and leaving us with nearly 650 total booths assigned by this time tomorrow. Either way you look at it, IAAPA Attractions Expo 2008 is filling up fast.

3:51 p.m.
OK, we've been at this for eight hours now. I know I'm getting tired, and all I'm doing is sitting here trying to be clever. The meeting is back on now, and it's scheduled to go until 6 p.m. They took a bit of a longer break, but it seems they're back at it with renewed vigor. Pressing on …

3:02 p.m.
Everything was moving at a good clip for awhile. The meeting hit a pause when two exhibitors asked to be put near each other. That took a few minutes' discussion to work out, but they're set and running again. Approaching No. 300.

2:40 p.m.
Good news: Jack hit a spot where he could fly through slots so fast the whole room had to start hollering "Stop! Stop!" to get him to slow down for a second. We're in the 270s now, and hopefully 300 is just around the corner.

2:34 p.m.
During the last break I talked to Jim Seay of Premier Rides, who also chairs the M&S committee, to gauge his thoughts on the meeting. This is Seay's third year on the space committee, and he said he enjoys the process: “You get a sense of what everyone wants from each element of the industry, and they all have their own issues important to them. This is a great process, because everybody’s interests are represented well.”

Overall Seay feels the process is going extremely well. Even though the meeting has slowed down a bit in spots to accommodate booth moves, he said there are much fewer this year than meetings prior. “That shows the people representing those interests are doing a good job,” he said. He also said he was proud to be a part of this process when the Vegas CVA officials came in and said "they’d never seen anything like it before.”

“At the rate we’re going, we’re going to get a lot of space booked,” Seay said. “Within a few days, people are going to take a look at the show floor and just be astounded how much space is already bought. This is going to be one of those shows where, if you hesitate to get in there’s going to be small amounts of space available. If you wait too long, you’re just not going to have any opportunity at all.”

2:25 p.m.
We've crossed the 50-percent barrier! The committee has assigned 254,500 net square feet. Also, another thing I just learned: When we're talking about this number, it's just indoor floor space, and doesn't include the exterior space. Typically the outdoor space isn't assigned at this meeting, but it's not unheard of.

2:05 p.m.
The committee is breaking for 10 minutes. According to the lineup, we're on No. 247. Remember, that doesn't include the 78 booths that were assigned prior to the meeting. We're inching ever closer to the 50-percent plateau for the entire floor; I'll let you know as soon as we hit that mark.

1:57 p.m.
Just to give you an idea of the challenges the committee's facing at this point: Right now we're in the 240s, and a couple slots ago Diane Vidoni said, with incredulity: "Their first choice is still available …" That's a pleasant surprise right now.

1:44 p.m.
Booth moves have really clogged up the system the past 20 minutes or so, with hardly any new booths being assigned. I think they're clear of those hurdles, though, and are starting to move on. They've done a handful of booths just in the past minute, and are now somewhere in the neighborhood of No. 235.

1:26 p.m.
For any Mac users out there (like me), the Online Interactive Floor Plan is probably giving you a lot of trouble, if you can even see it at all. If you'd like a look at the floor as of about 11:30 a.m. today, click here to download a pdf of the floor.

Right now the committee's working on No. 213. The pace is still sluggish, and I've heard a bit more about what's holding us back: Several exhibitors increased their booth sizes over last year, so the committee is sometimes having to redraw the floor plan on the fly to accommodate all these larger slots. Pete Barto, IAAPA's director of exhibition marketing and sales, has been sitting next to me all day serving as a translator/interpreter, and he tells me we're averaging 764 square feet per booth. "That's absurd," he tells me. And by "absurd," he means "fantastic!"

1:13 p.m.
Things are off to a slow start after lunch. There were several booth move requests awaiting committee members when they returned to the room. Also, whenever a big booth comes up, it requires a bit more discussion now as the floor continues to fill up.

1:07 p.m.
I spoke to Jack Mendes of Bob's Space Racers, the committee chair, at the break, and he's quite pleased with how the meeting is progressing. He said we're on the same pace as last year, and last year's was the best meeting he'd been a part of.

I asked Jack how he qpproaches this meeting and he called himself "the train conductor." He said he doesn't look as much at individual booths as making sure the meeting moves along at a good rate. He relies on his committee members to be looking ahead in the seniority lineup to be ready when their respective constitutents come up for placement.

"The committee's done a great job. We have a great group here," he said.

Last year, the Space Allocation Meeting wrapped after just a couple hours on the second day. Even though this year's meeting is generally at the same pace, with about 150 more booths to be assigned, Jack thinks it will take more than a couple hours tomorrow, but he's still hopeful the committee can get through all the assignments ahead of schedule.

12:50 p.m.
The committee is back from lunch and work has resumed.

Here's a look at the room from the front (standing basically in front of the big screen): 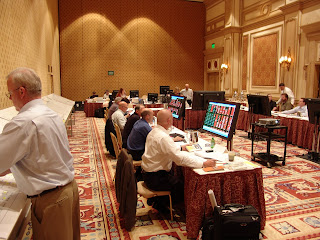 Posted by Jeremy Schoolfield at 3:50 PM

Thanks,
Also are the members receiving their email on site?

Hi Mark,
I'll do my best to update w/more booth numbers. Also, the members are not online during the session. Anyone who has questions for the committee, please e-mail exhibitsales@IAAPA.org, and your requests will be brought to the members' attention immediately.