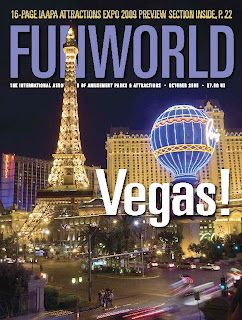 The October issue of FUNWORLD is our official IAAPA Attractions Expo 2009 preview edition, highlighted this year by the trade show's first trip to Las Vegas. The cover shot above was taken by veteran FW photographer Isaac Brekken, and he has more awesome shots inside (like here).

As if you couldn't tell from the headline, we're excited to take our show to the entertainment capital of the world. Inside the pages of this month's magazine you'll find all sorts of good info about the Expo, like:

• Tips for getting around Vegas
• Tips for navigating the new trade show floor (two levels this year!)
• A Q&A with Blue Man Group Co-founder Matt Goldman about his General Managers and Owners' Breakfast keynote address
• A peek at what promises to be an awesome Disney-themed educational session (which will feature the man who wrote the theme for "it's a small world" playing the song live in person)

Even beyond the trade show coverage, this is a particularly meaty issue of FUNWORLD, including interviews with retiring BALPPA Chief Executive Colin Dawson, and industry sales veteran Bob Dean, who discusses ride purchasing trends past, present, and future.

Also, I spent a couple days at The Ohio State University earlier this year interviewing students in the burgeoning Theme Park Engineering Group there, and my story is in this issue detailing how a few core members have sparked a veritable renaissance in coaster designers.

Thanks for reading, and be on the lookout for our November/December double issue, which this year will feature an exclusive interview with Walt Disney Parks and Resorts Chairman Jay Rasulo, talking about the massive overhaul going on at Disney's California Adventure.
Posted by Jeremy Schoolfield at 12:12 PM