More from FUNWORLD: Live on a Wire with Nik Wallenda

Think riding a speeding roller coaster at more than 50 miles per hour is thrilling? Try walking a tightrope more than 150 feet in the air, above a gasping audience and overlooking a theme park skyline. That’s exactly what Nik Wallenda, holder of two Guinness World Records, has done this summer at 11 Cedar Fair parks across the United States. In the August Quick Hits department, I briefly delved into Wallenda’s love for his craft and for theme parks. Read the full interview about this famous daredevil and his plans for next year here.

What inspired you to attempt this feat and how does it compare to some of your other stunts or high-wire attempts? 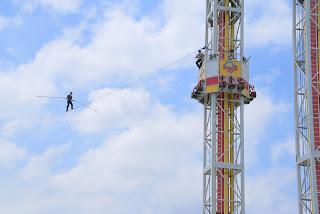 I’ve always had a heart for amusement parks. I’ve gotten so many lifelong friends at parks—the industry’s full of great down-to-earth people; it’s a family environment more than a working environment. It’s so alluring once you get started in it, that how can you get away from it? We get paid to make people smile in this industry—what more could you ask for?
I was contacted by Cedar Fair as they were looking for something to draw people into the park on weekends. So now we’re doing a 10-city tour: “Nik Wallenda Walks Across America.”

Does every walk feel the same if you’re up high enough?
No, it’s never the same thing twice. The stabilizers are actually held by park employees—they come off the cable sideways, which stops it from swinging back and forth. The size of the employee and how focused they are affects the walk. A lot of time they’re watching what I’m doing and not what they’re doing. You never know what you’re gonna get, so it’s different each time I walk a wire.
We have different volunteers each time; often they’re from the audience—it’s been done like that for several generations. As I’m crossing over a specific cable, my wife and father are at opposite ends helping those volunteers stabilize. If it’s a really long walk, I’ll bring four people with me instead of two.
At Worlds of Fun, the challenge was in the rigging. I had to walk from the “Detonator” [a 200-foot drop tower] to a crane and there was no way to get down from the crane. So I had to wave, turn around, and walk all the way back again.

Do you have a favorite type of ride at the park?
My kids take me on all of them, but my favorite at Worlds of Fun is the “Patriot.” I like how smooth the steel coasters are engineered—they’re a blast. We’re incorporating rides into my walks all summer. At Kings Island, I’m going to walk from their “Eiffel Tower” to the new “Diamondback” roller coaster!

What role does the audience play in your performance—can you hear them when you’re on the wire?
I can hear it all, and I see the actions of people moving around underneath me. They play a big

role in the walk and that’s why I do it. If I win the lottery tomorrow, I would not stop performing—I just can’t imagine not doing it. It’s a lifestyle more than a career or a job for me—it’s my hobby. When we’re home and not performing, I’m on the wire five times a week and my whole family’s there with me.

Your family—some of them having belonged to The Flying Wallendas—has a strong connection to the performing arts. Tell us what you’re all involved in.
Sarasota, Florida—where we live—is the circus capital of the world. My son is 11 and recently performed a high-wire act in his school play. Generally at that age, you’re a little timid in front of an audience, but he kept doing more tricks in front of the audience. He’s a born performer—there are eight generations of performers on my father’s side and nine on my wife’s. I think my son sees the gratification his parents got and wants to be a part of that.
My wife Erendira’s family was the first to do quadruple somersaults on the flying trapeze. She also performs with wave poles. And during my show in Detroit, she walked an 80-foot wire with no safety net.

(above photos: Wallenda walks the wire at Worlds of Fun, photos courtesy Worlds of Fun)
Posted by Marion Hixon at 4:15 PM