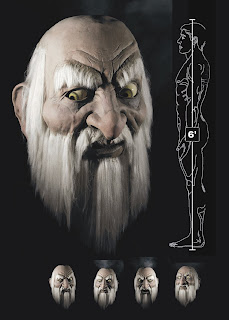 In the Nov/Dec issue of FUNWORLD, News Editor Keith Miller wrote an intriguing story about the present and future of animatronics (click here to read the story in our awesome new digital edition format—more on that soon!). Keith had more good quotes than he could fit in his story, however, so he's sharing what didn't make the magazine below:

"CGI and animatronics complement each other. Unless you spend a lot of money on it, CGI looks kinda fake. The theme park industry has been adopting video technologies for the things we can’t do, and that's what you'll see for the near [term.]"
—Mark McDonough, president, Creative Visions, St. Louis, Missouri

"CGI hasn't eliminated the need for animatronics in movies yet. There may come a day when it will, but I don’t think they’ll ever go away because sometimes it's a lot cheaper to make the real thing rather than have CGI do every frame, especially when there’s a live actor interacting with it."
—Ed Edmunds, president, Distortions Unlimited, Greely, Colorado

"The interactivity, the autonomy—those are the things that are going to be the big push. Animatronics allow you to sit with a historical figure and suspend disbelief. And the other thing is you can create completely imaginary things with animatronics—dragons that fly around the room, 12-foot-tall bugs. You’ll see an increase in creativity. We'll create animatronic buildings—we can have a building that actually changes as you walk through it."
—Rodney Heiligmann, president, LifeFormations, Bowling Green, Ohio

"I think there are still many applications that have not been explored—the museum field, for one. In the theme park industry, we’re seeing the significant branded parks being developed in other countries. We’re still seeing [animatronics] develop. We see today the return of the dark ride, and the themed animated attraction still has a tremendous opportunity for today’s park. It’s unique to the theme park industry, and it’s historically significant."
—John Wood, chairman/CEO, Sally Corporation, Jacksonville, Florida
Posted by Jeremy Schoolfield at 11:18 AM