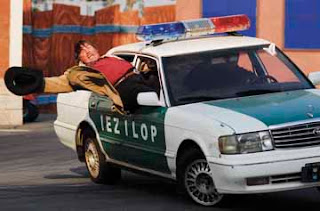 For the March issue of FUNWORLD, I interviewed Red Horton, a stuntman currently appearing in “The Great Diamond Heist” at in . Below is my extended interview with Horton, and a little more information about other stunt shows put on by Mirage Entertainment.

FUNWORLD: Tell us a little bit about “The Great Diamond Heist” and how it differs from other shows.
Red Horton: In the show, a bumbling and blundering inspector and the local police force joined with the city mayor to capture thieves who have stolen the world’s largest blue diamond from the city’s museum. In the end they all save the day and return the diamond to the Museum. The show is like “” meets “The Pink Panther.”

It is the first stunt show of it is kind to have a 60-foot ramp-to-ramp motocross jump performed three to four times a day, seven days a week. Besides being very funny and entertaining we have both men and women in every aspect of the show. They act, they do the stunts (high falls, full fire burn, Aussie-style repelling), and they participate in knockdown, drag-out stunts fights. In “The Great Diamond Heist,” I get kicked, punched, knocked to the ground 12 times, and I hang out of a police car window as the car spins backwards!

FW: Is there any audience interaction in the show?
RH: At the beginning of the show, two-thirds of the cast is in the audience—thieves hiding from police, police searching for criminals, and the inspector slipping and bumping his way through the crowd. The audience loves every minute of the pre-show slapstick.

FW: What are some of the perks of being a stuntman, and how many years of training does it take to become one?
RH: I get to travel, meet people, and experience other cultures, but most of all I enjoy making the audience—especially the children—happy. The main reason I keep doing this job is because I love the industry and am always honing my skills—even at 50 years old! Not only do I keep up, but I pass by those that are less than half my age.

It takes two to five years just to learn the basic of stunt performing, and five to ten years of hard work and a lot of luck to possibly make it as a full-time stunt person.

FW: How much danger or risk is involved in your job, and have you ever gotten hurt before?
RH: I’ve only been injured once in 30 years. I broke my foot on my birthday in the middle of a show, but finished the show before going to the hospital! In movies and television, stuntmen take the chance of getting seriously hurt or killed. However, in live shows, it’s different and the stunt performers are a different breed. They still have the chance of getting injured but they have to perform these stunts three to five times a day, 365 days a year. Mirage Entertainment looks at every aspect of the action stunt show and puts the cast through extensive training by leading professionals in the industry. Performers are chosen to do specialized stunts that are extremely exciting, but always safe. Safety is the name of the game in live action shows.

FW: What is the most memorable situation your job has gotten you into?
RH: I have many stories, but my favorite is when after entertaining a group of children with cancer and physical injuries a reporter told me a couple of the boys told him the reason they liked watching me perform was because it made them laugh and that made the pain go away.

“The Great Diamond Heist,” which Horton currently stars in, is put on by Mirage Entertainment and has just started its third year of production. Mirage also produces “The Great Candy Caper” at Hersheypark, which is in its third year as well. The show features two Patagonian Sea Lions and combines the animals’ talents with comedic diving and stunts. “The Great Candy Caper” was nominated in the edutainment category of IAAPA’s 2007 Big E awards.