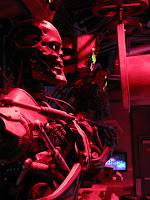 One can usually spot the scenic work of Entertainment Design Group (EDG, www.goedg.com) on attractions such as “Terminator Salvation—The Ride” (left) at Six Flags Magic Mountain and “Bizarro” (bottom of post) at Six Flags New England and Six Flags Great Adventure. So when ABC’s “Extreme Makeover: Home Edition”—the home redesign show for families in need—approached EDG to make over a 6-year-old’s room, it was a perfect match. EDG, located in Atlanta, is only 85 miles from the newly built home, located in Pine Mountain Valley, Georgia.

The episode airs this Sunday, May 16, at 8 p.m. EDT on ABC. And before any secrets or final designs were let out of the bag, Gary Seputis, on-site production manager for the project, gave us a glimpse into the work behind the camera and what to expect when taking part in such a challenge.

How did you get involved with “Extreme Makeover: Home Edition,” and how did you feel about participating?
We were contacted by Alexandra Lacey, one of the show’s design producers who had gotten our name from a company that participated in a previous episode. Most of us had seen the show before and we jumped at the opportunity to be involved.

I’ve seen a lot of episodes, and in many cases they’re doing basic design. But as things have gotten more extreme over the years, they’ve begun to do really off-the-wall projects—things that have to be custom built and designed. People probably don’t think of a scenic company as something for a home, but the show decided to tap into our resources.

What initial guidelines were you given at the project's outset?
Well the time frame was a little scary. They called us about four weeks before the installation and we started from scratch at that point. Alexandra threw some ideas out and over the weeks, those ideas changed completely; it was a very fluid process. Once she had met the child whose room we were designing, the design started to change a bit.

And all materials and services that appear on the show are 100 percent donated—down to each screw and every piece of drywall. All of our products, transportation, and time spent on design and construction time was donated. So, as other vendors for the episode either fell through or others were confirmed, we had to change the concept for the room. Alexandra came up with other ideas and there were a lot of phone conversations. We didn’t really get a final design until 48 hours before installation. We were still massaging the ideas up until that point. 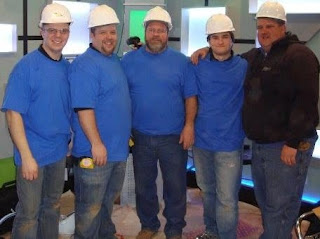 What moments did you most enjoy from the experience?
The whole process! It was really neat to be involved in such a huge undertaking—it’s absolutely crazy how large of a production this really is. What you don’t see on television is how many people are actually involved.

When we arrived to install, we were at the back of a line of 25 trucks. There was a queue headed up to the house and about 100 personal vehicles parked up and down the road of all the companies donating their goods and services. On top of that, there were 250 to 350 volunteers who parked at an off-site facility and were brought in on school buses. They were all there to paint, clean floors, and help install equipment. It was almost like an ant hill got kicked over and people were just flowing out.

When we arrived, the yard was nothing but clay and mud and workers were creating and paving the driveway. Then when we drove out that night, they had finished the driveway and everything was completely landscaped, all during that 12-hour work day.

Did EDG get to take part in the installation?
The frame and rough end of the house were built by other companies, but after designing our components, we took them on site and installed them ourselves. And we took special considerations because Jacob—whose room we were working on—is in a wheelchair. Everything needed to be made accessible to him and at a specific height.

From a public relations standpoint, how did you promote your involvement in the show?
Other than the one press release, we aren’t able to really promote our involvement until the episode airs. We couldn’t give out too much information, but we will be receiving credit on the show itself, which includes our name in the credits as well as on the web site of the show. We’ll also be able to put the “Extreme Makeover: Home Edition” logo and links to the episode on our EDG web site.

It just seems that people have a real connection with this show. So when people see that we’re involved and have donated our time and talents, that will help install trust in our company.

What advice do you have for other IAAPA members with similar television opportunities or redesign projects? 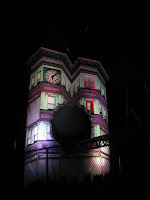 If anyone can afford to take it on, it’s a great opportunity, if just for the charity and community support aspects of it.

But it does take a huge amount of support and effort. Make sure you get a good idea of what the timeline and expectations are before you get involved. And understand there will be some changes. It was an exciting project for us, but we did not expect the timeline and expectations to keep changing like they did. Just roll with it and make it happen!

Check back next week for part two of our interview with Seputis, where he delves into the theming and installation details of the final room design, and what EDG learned as a company!

All photos courtesy Entertainment Design Group.
Posted by Marion Hixon at 9:00 AM

Email ThisBlogThis!Share to TwitterShare to FacebookShare to Pinterest
Labels: Theming/Design