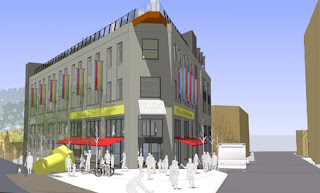 I don't know when the "going green" phrase came into the culture, but the first time I heard it was about three years ago when I visited the Madison Children's Museum in Wisconsin for a cover story on its efforts in green exhibit design.

At the end of that story—which you can read here—I mentioned how excited the museum's two lead designers were to move into a different building nearby in downtown Madison, allowing them essentially a blank canvas to design with sustainability (that's another word I learned on that trip, by the way) from Day 1.

The museum took another big step recently when it unveiled plans for the new building (see rendering above) in a ceremony out front of what was, at one time, a department store. You can find more info about the project (and the museum's capital campaign to raise $10 million in funding) here, which includes a virtual tour of the new facility; check out coverage of the announcement in Madison's Capital Times here.

I also touched base with John Robinson, one of the designers I interviewed for the cover story, to get an update on their progress. He told me:

"We are still on track to open a new, expanded and much greener facility. We intend to take everything we learned from developing our green exhibits and apply the lessons far more aggressively in our new building."

Robinson said the plan is start serious demolition and reconstruction on the new building this fall, with a target opening date of late 2010.
Posted by Jeremy Schoolfield at 3:25 PM

Email ThisBlogThis!Share to TwitterShare to FacebookShare to Pinterest
Labels: Museums