5:13 p.m.: Jack Mendes just called a halt to today's session after No. 342, Berk Paper & Supply. So, we're done for today, folks. Thanks to all those who followed along—we had a record-breaking day for In the Queue, so I'm glad you apparently found this valuable.

We'll all be back tomorrow morning at 8 a.m. PST again. Until then, sleep well!

5:08 p.m.: The committee continues to move right along. They're about to hit No. 340, Prime Karts. As hoped, the afternoon has been easier than the morning. Not flying or anything, but good, deliberate pace. There haven't been that many holdups the past few hours. About an hour to go, now, in today's session, and the committee has placed a little more than 203,000 square feet.

4:25 p.m.: Point of clarification: Earlier when I said "halfway point," that was for the entire set of contracts. The committee just placed Nobel Roman's, No. 317, which is the halfway point of all the booths to actually be placed here at Space (remember, about 70 25-plus-year exhibitors were already on the floor when we started).

So, however you look at it, things are moving along pretty well.

3:40 p.m.: The committee's back, and it just placed the aforementioned Redemption Plus. With that assignment, we've officially reached the halfway point. Hooray! The floor now has more than 171,000 square feet spoken for.

3:24 p.m.: The committee is taking a 10-minute break. The pace has been up over the past hour. When they rejoin, members will place No. 279, Redemption Plus.

3:06 p.m.: I wanted to follow up on what Jim Seay said a couple hours ago, about how the floor was starting to shake out.

Earlier today, I listened in as Pete Barto explained to a committee member the overall "theory" of placing booths at this year's Expo. Obviously Vegas will be different from last year's Orlando show because Expo will be split between two halls. In addition, one of the halls is on the second floor of the convention center, directly above the other. As anyone who's visited our show knows, exhibitors bring some MONSTROUS exhibits to the Expo, including rides that weigh, you know, a lot. That means those companies must go on the first floor, because their exhibits exceed the weight limit for the second-floor hall.

With that in mind, companies we know will have lighter exhibits—inflatables, coin-op games, the theme and hi-tech pavilion, first-time exhibitor pavilion, etc.—are slated for upstairs.

So, that was the gameplan coming into Space, and the committee is working off that layout to shape the rest of the exhibit halls.

2:42 p.m.: The committee just placed Stinson Band Organ Co., No. 252, the company I mentioned in my post yesterday. Still moving very well. Nice to be past the 250-exhibitor plateau. We're very close to being halfway through.

2:06 p.m.: The committee's taking a short break. This afternoon session is clicking along very well, overall. The next booth to be assigned will be International Laser Tag Association, No. 241. I can attest to the level of conversation about every single booth that the committee is really working through each situation carefully.

1:40 p.m.: Here's a look at the Space Allocation room. We're in the Emperors Ballroom at Caesars (they must have known I was coming), which is great because it's a nice big space. As you can see, there's a ton of equipment brought in to make this whole operation happen. 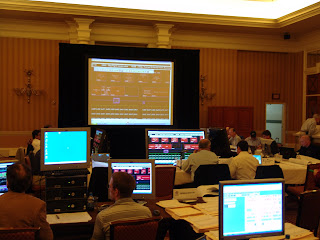 1:17 p.m.: Here's some comments from a few committee members regarding the morning session of Day 1:

Jack Mendes: “It’s a lot more complicated because the hall is long and narrow, and there’s two floors. But I think we’re moving forward nicely. It will [get easier] at certain times, and then all of a sudden you’ll get to a big booth placement that you have to create, and that’ll slow things down.”

Jim Seay: “When you take into consideration the unique conditions this trade show floor has, I think we’ve done amazingly well in placing people close to what everyone’s been looking for. It’s clear the direction things are going. The hi-tech people have established a bulkhead on the second floor, and the people who have been exhibiting a long time have coalesced on the first floor. You can see it coming together—those will be the main areas, and everything will branch out from there.”

Jeroen Nijpels: “We solved some quite challenging things so far which looked, on paper, as being problematic. I hope the people we solved them for are as happy as we are.”

12:40 p.m.: The committee is back from lunch. They're dealing with some booth moves that came in over the break, then will be back to assigning new booths. I talked to a few members between sessions and will post comments shortly.
Posted by Jeremy Schoolfield at 3:39 PM