Honoring a Legend: Thanks for the Memories, Marty 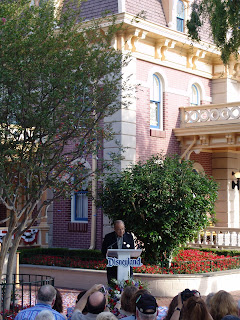 Marty Sklar stands below his new window at Disneyland's City Hall
What better way to celebrate Disneyland's 54th anniversary today than honoring one of The Walt Disney Company's original and most revered visionaries?

This morning in a ceremony outside Disneyland's City Hall, Disney Legend Marty Sklar was given his own window at the legendary theme park—fulfilling a tradition begun by Walt Disney himself.

“This is probably the greatest honor we can bestow on any of our Cast Members that have gone above and beyond to make sure we create magic for every guest,” said Disneyland President Ed Grier. “Certainly no one has gone above and beyond more than Marty Sklar in Walt’s spirit of hope and optimism.”

“Marty was one of the original cast of Walt’s dreamers and doers,” said Bruce Vaughn, chief creative executive for Walt Disney Imagineering. “He was one of the dedicated pioneers of Imagineering who forged a commitment to creativity and innovation in our storytelling. His generation of Imagineers crafted the idea that it’s kind of fun to do the impossible. If it hadn’t been thought of, they thought of it; if it didn’t exist, they built it; and if it couldn’t be done, they did it anyway. To this day, this philosophy guides us, differentiates us, and makes us … Disney. He helped establish a foundation that Imagineers today continue to live by.”

Sklar's window now resides just above City Hall's entrance, at office he used to use while creating dreams and shaping them into reality.

“Being here at this location, where you can look over where Walt dedicated Disneyland, this is where the heart is,” Sklar said. “This is very emotional for me. Fifty-some years, so many memories here. There hasn’t been a boring day.”

Sklar began his Disney career in the PR department a month before Disneyland opened July 17, 1955. He moved to Imagineering (then known as WED Enterprises) in 1974, beginning a 30-year run of creating Disney parks and attractions around the world. Entering today, he was the only active Cast Member to participate in the opening of all 11 Disney parks worldwide.

After the ceremony, I asked Sklar if even Walt could have imagined the scope of The Walt Disney Company's success from what began here in Anaheim with Disneyland.

“Oh sure,” Sklar told me. “The only thing Walt would have said is, ‘What took you so long?’” 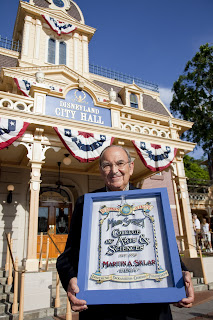 Marty with a replica of his window (courtesy The Walt Disney Company)
Posted by Jeremy Schoolfield at 7:08 PM