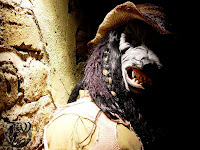 For February's "Day in the Life" column, I had the pleasure of interviewing Ted Dougherty, who plays a werewolf at Knott’s Berry Farm's Halloween Haunt. It was truly one of the most enjoyable and amusing interviews I’ve done—and that probably comes from Dougherty’s passion for the job. It’s always interesting to hear what someone else does with their daylight (or nighttime) hours, and I loved Dougherty’s stories of guests reacting to his scares and his explanation of what a “slider” does. Read on for an extended version of my interview with Dougherty and see the bottom of this post for a rundown of how he gets into costume and makeup.

Ted Dougherty wears many hats. Living in Arcadia, California, he’s a paralegal, the co-director and co-writer of a 4-D attraction for Hollow 4D Studios, and string bassist in local jazz groups and classical symphony orchestras. But surely his most shocking role is that of an Old West werewolf in the “Ghost Town Scarezone” at Knott’s Berry Farm in California during Halloween. The 2008 season marked his eighth year of inciting fear in the hearts of guests on the midway. Here, Dougherty tells FUNWORLD what’s great about being a monster.

FUNWORLD: Tell us about your history with Knott’s Berry Farm’s haunt events.
Ted Dougherty: I have been attending Knott's Berry Farm’s Halloween Haunt every year since 1987, and October 2008 marked the eighth season I have worked as a monster for the event. My character is an Old West werewolf, who lurks in the historical Ghost Town section of the park. “Knott’s Scary Farm” just celebrated its 36th season. As an employee, I do my part to help maintain the legacy of the event, which is one of the main reasons I enjoy portraying the character. It is incredibly thrilling and a complete privilege to walk the same paths so many people have before, with so much history involved. It is bizarre—and in a creepy way, somewhat satisfying—to think my character has been the subject of many guests' nightmares over the years. It's a crazy thought to ponder: in the middle of the night it is my face they see when screaming themselves awake from a hideous dream.

FW: What qualities of the character have you developed through the years?
PD: The art of the scare is an ongoing learning experience for me and part of my drive is that I cannot reach perfection with respect to specific tactics. Although I have scared and entertained thousands of guests over the years, there is always something to learn in taking “monstering” to the next level.
Some of the behaviors or qualities of the character I have developed are tributes to the great monsters of the past, which can include traits such as stalking, intimidation through stares, as well as “pop-out” scares. I have looked to the past when it comes to developing my character. Researching the history and folklore of lycanthropes (a.k.a. werewolves) through books, movies, etc., has been helpful, as has researching monsters in general. I have been a werewolf fan for many, many years so for me to portray one at Knott’s is thrilling. Although at times my character can be sinister, sneaky, and creepy, he is quite often aggressive in his “attack.” Let’s face it—who ever heard of a tame werewolf?
I am also known as a “slider” for the event. Sliding is a scare tactic created at Knott's Halloween Haunt. Through use of specialized metal gloves, shoes, and kneepads, we slide on the ground (on our knees and hands) at the guests in a quick fashion, using the element of surprise to scare. The effect is fast, loud, and startling as metal scrapes the floor surface and a creepy monster flies toward you on the ground.

FW: What kind of interaction do you have with guests, and how do they react?
PD: I am stationed in the “Ghost Town Scarezone” of the park and am free to roam amongst guests in the midways of this particular area. 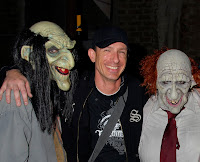 People say that the eyes are the gateway to the soul. I use that to my advantage and stare relentlessly at as many sets of eyes of the guests as I can. In my mind, I am hunting. I can detect those who are weak—or those who do not want to look at me—by their eyes. Body language is very informative as well—again, I can see those who wish to avoid me. It may surprise you to know how many large adult, macho males are the weak ones!
With thousands of guests visiting Knott's Halloween Haunt each year, it is important to find a good medium between quality scares and quantity. My favorite reactions are when my scare partner and I arrange for an “attack” that can scare up to 20 to 30 people in one effort. The quality in the guests’ reactions is satisfactory as well as the quantity.
I have seen people react in every way from a simple flinch to full-blown screams and shrieks of terror, dropping to the ground, crying, or soiling themselves out of sheer fright.
Those reactions provide a bizarre sense of satisfaction for us monsters, but it is certainly more satisfying when a guest enters with a negative attitude indicating they may be “too cool” to be scared and my character is successful in changing their mind … to the point where the guest runs away screaming. The true target is the adult who thinks they can't be scared. When my character scares those targets, it is certainly memorable.

FW: What do you do in your off time, and how do people normally react when you tell them you're a monster by night?
PD: I am a paralegal in the workers’ compensation field through the remainder of the year. Most people in my “day job” cannot understand the passion I have for working Knott’s Halloween Haunt, so I usually steer clear of the subject. When it does come up, some people are very impressed that I have a small part in the event while others stare at me blankly—I suppose that can be expected.
Aside from the paralegal work, I co-directed and co-wrote a 4-D attraction ride for Hollow 4D Productions that made its debut at IAAPA Attractions Expo 2008. I also have appeared as a zombie for private events for Rob Zombie and participated in the Southern California Zombie Walk for the Linda Blair World Heart Foundation. Lastly, I was a music major in college and play the string bass with local jazz groups and classical symphony orchestras.
In my day job I appear in courtrooms before judges and attorneys in a very professional environment, while at Knott’s, I am portraying a werewolf, in the Old West from 1885, and scaring as many people possible. If I tried that in one of those courtrooms, I would be carted off to the mental hospital, if not jail! In other words, as many have said before—in October, I am paid to do things that I would normally probably be arrested for. The most enjoyable aspect of working Knott’s Berry Farm’s Halloween Haunt is the pride in being a part of an event so rich with history and entertainment. It is definitely different—almost the complete opposite—to working my other job.

FW: Is there anything you're particularly scared of?
PD: Definitely! I’m a BIG chicken when it comes to real ghosts. I’m not particularly fond of creepy crawlies or heights, either. 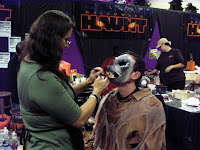 FW: What does your costume and makeup preparation entail?
PD: Preparation can take up to two to three hours.
The wolfish yellow eye contact lenses are put on first. Due to the quick lunging actions at guests, I then wrap each toe in medical tape, both ankles and Achilles tendons in athletic tape, and put two pairs of socks on each foot. Hockey pads, and knee and ankle braces are also worn underneath the costume. As a slider monster, I also wear special knee pads, shoes, and gloves for that scare tactic. The Western-style shirt and pants are put on as the final touch.
At that point, I’m ready for the makeup chair; this process can take anywhere from 20 to 40 minutes depending on the detail the makeup artist utilizes. The makeup applied lasts all night, but we must take care in removing the prosthetics at the conclusion of the evening because the makeup pieces are reused over a period of about three days. After the makeup is applied, I put on my wig and cowboy hat and I’m ready to go!
Posted by Marion Hixon at 11:21 AM

Thanks for shedding a spotlight onto an otherwise frightening subject. It’s comforting to know that the monsters that terrorize us under the moonlight are actually working alongside us during the day. I always love to hear about the human side to the parks that I love so much. This sounds like one wolf that shouldn't be let back into the wild!

I wonder where the artists that create the monsters get their training? Are they all hobbyists or do some do make-up professionally?

The make-up artists at Haunt come from as varied a background as us monsters. Some are school-trained, others self taught. Some do this just for Haunt, others do make-up for a living. All however are first class.

Great Interview with Ted! If you haven't visited Ted's "Ultimate Haunt" website, it's a must-see. Ted has done a great job of pulling together photos and interviews of Knott's Halloween Haunt over the years since it started in 1973. I know -- I was the first witch!