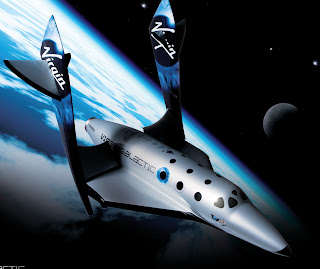 Today's IAAPA News Flash (if you don't know what this awesome tool is, look under "Communications" here), featured an Associated Press article about space tourism, specifically the unveiling this week of the White Knight Two "mothership" aircraft by Virgin Galactic.

The tech-speak surrounding this project is deep, but as I understand it essentially White Knight Two will provide an airborne launch platform for the next private spacecraft, SpaceShipTwo (pictured conceptually above, courtesy of Virgin Galactic). Here's a key sentence from the AP story:

That one phrase immediately brought to mind one of my all-time favorite educational seminars from the four IAAPA Attractions Expos I've covered for FUNWORLD. When we were in Atlanta in 2005, the final keynote speaker of the week was Dr. Peter H. Diamandis of X Prize, a foundation dedicated to fostering "radical breakthroughs for the benefit of humanity." It was X Prize that helped bring about SpaceShipOne back in 2004, the first private spaceflight in humanity's history, and the group continues to soldier on in its desire to see space tourism become a reality.

Of the dozens (hundreds?) of educational sessions I've covered at IAAPA events over the years, Diamandis' talk back in '05 has always stuck with me, hovering right there at the back of my brain. He was so inspiring in his belief not just for commercial spaceflight, but for the creative will of humanity to always be exploring to the limits of its potential.

“The space experience is now real. It’s not a matter of watching the government do it. The public can do it," Diamandis told us that day. He predicted significant steps toward private spaceflight by 2015, and as of this week, it looks like his bold statement is beginning to prove true. (To read my entire write-up of his seminar, scroll to the bottom of this page.)

Like so many others, I've always been fascinated by outer space. Maybe it was all those visits to the Smithsonian Air and Space Museum here in D.C., maybe it was watching "Star Wars" too many times, I don't know. But I do know how pleasantly shocked I was to find the outlandish idea of space tourism discussed with depth and sincerity at an Attractions Expo. I left the auditorium that week inspired, excited, and hopeful for the future—a perfect way to end a hectic trade show week.

Nice to see that hope starting to be fulfilled.
Posted by Jeremy Schoolfield at 12:20 PM

What essentially happens is 'Eve' the White Knight plane - takes the 'VSS Enterprise' up and then that does its thing. You get out to space by being weightless, but it's not space as I'd see it. I remember when they said we'd be able to live on the moon by the year 2000. I don't feel that cheated!

Now that Space Tourism is becoming a viable reality, it should happen soon sometime in the 21st Century - perhaps my kids will retire to the moon - I hope so!