Return of the King: Who’s the Best Elvis? You Can Help Decide 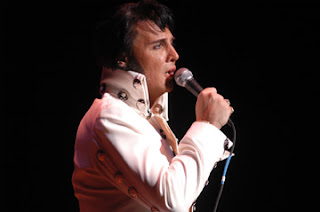 I visited Elvis Presley’s home at Graceland in Tennessee yesterday, reporting on a future FUNWORLD story (more on that in a future post). While I was there, the PR staff mentioned an idea that could be useful for some IAAPA member facilities.

In 2007, Elvis Presley Enterprises (otherwise known as EPE, which owns and operates Graceland and all things Elvis) sponsored its very first Elvis Tribute Artist contest. Elvis tribute artists (more commonly known as impersonators) are a segment of the fan population EPE had kept at arm’s length—until now. Last year, the company decided to embrace the art of tribute and sponsored an official contest in Memphis, Tennessee (a few miles from Graceland, where Elvis cut his first record at Sun Studio).

The 24 contenders were culled from regional contests and festivals held all around the world and sanctioned by EPE. The resulting competition was a huge success, selling out Memphis’ Cannon Center for the Performing Arts and generating a nice amount of national and international media coverage. The winner, Shawn Klush, is pictured above.

The contest was such a hit, EPE is naturally bringing it back for another go-round; this year’s version is again scheduled for Elvis Week, which runs Aug. 9-17, in Memphis.

So here’s where our industry comes in: The PR folks at Graceland believe a preliminary round contest is perfectly suited as a promotion for amusement parks, especially since so many have some sort of musical revue as part of their live entertainment offerings. If this sounds interesting to you, find more information about the 2008 contest here; more information about how to obtain an official contest license can be found here.

It may be worth a shot for some of you out there. After all, who can’t help falling in love with a bunch of Elvis Presleys?

Posted by Jeremy Schoolfield at 2:00 PM

Who's the best Elvis? Bruce Borders, of course! He used to be mayor of Jasonville, Indiana, and used the moniker: Mayor by day, The King by night. Mayor Elvis performed several weddings at Holiday World and even bungee jumped. He was featured last fall in this FunWorld article: http://www.iaapa.org/industry/funworld/2007/sep/features/CreativeCommunicator/CreativeCommunicator.asp.
Btw, "Mayor Bruce" is now "State Legislator Elvis." Can't you just hear it? "Ladies and gentlemen, Elvis has left the Statehouse..."