Legislative Summit 2008: Parks on the Hill 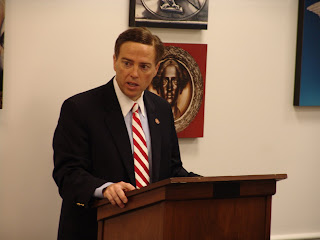 Representatives of amusement parks and attractions from all over the United States came together today for IAAPA’s annual Legislative Summit, meeting inside the U.S. Capitol to learn about important industry issues and support legislation that benefits our business. I sat in on a few sessions today, and while I live in D.C., Capitol Hill’s daily atmosphere is foreign to me, so it was energizing seeing park operators and political representatives communicating and learning from each other.

Congressman Ric Keller (left), of Florida, started off by addressing the Markey amendment, the current state of the economy, and the Travel Promotion Act (TPA). Commenting on the latter, he commended grassroots efforts that bring attention to the struggling state of the tourism industry. He noted that effects of September 11 are still visible, as visitor numbers still dip below pre-9/11. Keller also mentioned that Congressman John Boehner of Ohio, Republican leader in the House, will be visiting Orlando next week to promote and discuss tourism awareness. Keller’s Florida district includes such attractions as SeaWorld Orlando, Walt Disney World Resort, Gatorland, and Universal Studios Orlando. 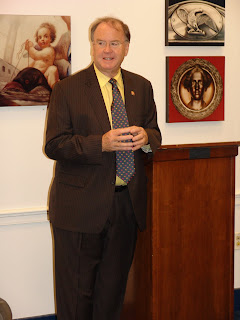 From the opposite side of the country, Congressman Sam Farr’s (left) California district includes the Monterey Bay Aquarium. Neighboring his county is the Santa Cruz Beach and Boardwalk, which he praised as a valuable and historic landmark. He encouraged bordering cities to assist each other in visitor growth, and to profit off the multiple industries which feed into tourism, like transportation and hospitality.

Farr stressed the importance of the Travel and Tourism Caucus, explaining that caucuses communicate to political leaders the issues important to their constituents. “People aren’t aware that tourism is hurting,” he added. “We need to educate society that the attractions industry represents more point-of-light businesses than any other.”

Today’s Take-Away:
If you’re reading this from home, here’s how you can mimic today’s progress on the Hill:
Stay tuned for another update tomorrow, when I sit in with park managers meeting with their Congressmen and women. I’ll also include a quick review of IAAPA’s stance on the Markey amendment and the state of H2B Visas.

If you have any questions about the Summit, please post them in the comments and I’ll try to address them tomorrow. Or visit http://www.iaapa.org/government/legislativesummit/.
Posted by Marion Hixon at 3:29 PM